Ok... ok.. so we all love us some Swiss Meringue Buttercream right? Me tooooo... BUT I gotta say, when you're making a ton of cakes, sometimes the process can be.. daunting! I came across Lauren Kitchen's recipe, which her and Mike McCarey use, and had to give it a go. Looooveee it. LOVE IT. It's my go to now. It gets nice and solid, just like we need for our cakes, and it's DELICIOUS!

This recipe does ask for egg whites and you need to use the PASTEURIZED egg whites in the cartons. People tend to get a little worried about the "raw" egg whites, but when you use pasteurized, you know they have already been heated up to kill any bacteria (the same as you would do yourself over the stove top for a true Swiss Meringue BC).

Technically? It's more like making a royal icing, and then adding butter! 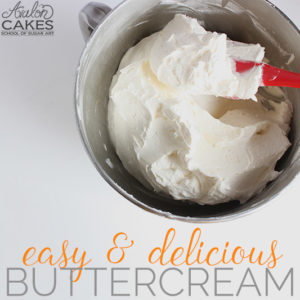 This recipe has been altered from Lauren Kitchen's recipe to better suit some palettes (sweeter) and also I find it a little better for piping/flowers. It's great for underneath fondant also as it gets nice and solid in the fridge.
PRINT
Yield:11 cups

Notes via Lauren Kitchens: Storage: The day after you make the buttercream, you will need to whip it at medium speed for 5 minutes. Store at room temp (68-74 degrees F) for up to 2 weeks. (Yes, you heard her correctly). Store in the fridge for up to 2 months. Store in freezer for up to 6 months. Color: Use gel paste or oil colors to color your buttercream. Egg Whites: Purchase the pasteurized egg whites in the grocery store next to the eggs. Most carton eggs are pasteurized. You can use fresh egg whites but it will decrease the shelf life of the buttercream unless you pasteurize them yourself. I do not recommend using meringue powder as a replacement. Tips from Avalon: For hot and humid areas, you have the option to take anywhere from 1/4 to 1/3 of the total amount of butter out and replace it (in weight) with shortening. If you have particularly warm hands and are doing a lot of piping (that includes buttercream flowers), I suggest this recipe with 1/4 of the total amount of butter replaced with shortening. I'm not a huge shortening icing fan, BUT some places *need* it for climate purposes.

Like most sites, we use cookies to help improve your experience on our site. Find out more.